The main aim of the Authorship Markup is to link certain editorial content with the correspondent author. This is possible via integrating a rel-attribute ("rel=autor", "rel=me"). This connection requires an account in the Social Network Google Plus or an author’s website. Since the end of August 2014 the Authorship Markup is no longer supported by Google and the author’s information is not shown in the SERP any more. 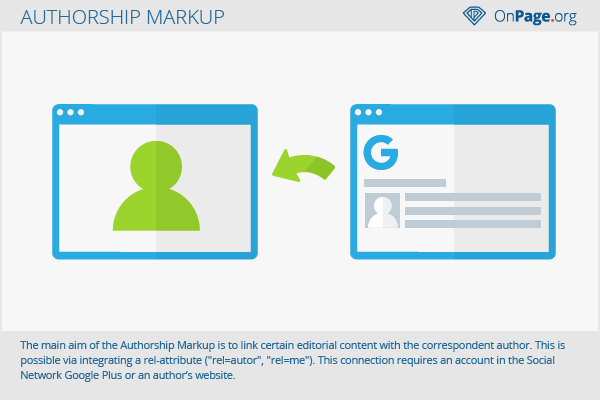 Search engines invented the Authorship Markup to assign web-content a certain author. This should lead to an increase in the trust for specific web-sources and in the online-reputation of the author - the so called “Author-Rank“. The Authorship Markup had an immediate impact on the snippets because the author’s profile on Google Plus was linked directly in the snippet, so the reader could find out the author of a certain article with one click.

Primarily Goolge not only set a link to the author’s profile in the snippet, but also showed and linked the profile picture which has been saved by the author. In a Google Plus Post from 25th of June 2014 John Müller announced that the profile picture will neither appear in the search snippet nor in the Google News. [1] In the same posting Müller said that tests by Google resulted no difference in the CTR between snippets with and without profile picture. On the 28th of August 2014 Google adjusted the author-integration in the search snippets. However, John Müller mentioned in his Google Plus Posting the same day that this is not the end of the efforts for a clear assignment of the authorship. Rather it can be suspected that the way how authors are tagged in the quellcode changes. Müller refers the possibility to work with schema.org in the future explicitly.

„Going forward, we're strongly committed to continuing and expanding our support of structured markup (such as schema.org). This markup helps all search engines better understand the content and context of pages on the web, and we'll continue to use it to show rich snippets in search results.“ [2]

The background for leaving out the author’s integration in the snippets can only be presumed. Perhaps profile picutres have distracted to much from Google AdWords and the users concentrated too much on the center of the SERP. But John Müller rebuted this estimation:

“If you’re curious -- in our tests, removing authorship generally does not seem to reduce traffic to sites. Nor does it increase clicks on ads. We make these kinds of changes to improve our users’ experience.“ [3]

But for sure this won’t weaken any Google employee completely. Müller confirmed by the quote above that showing the author’s profile picture leaded to a bad user experience inside the SERP, because the user rather clicked on the picture and thought they would get to the article. But instead they got to the author’s profile on Google Plus and lost interest on the article. Not only for the article but also for the social network and such a scenario would be a disadvantage.

How the Authorship Markup was integrated before

The following rel-Attribute is used for an Authorship Markup: rel="author" or rel="me"

Authors can connect their content with an authors’ page or also with their Google Plus Account. The Authorship Markup serves as a hallmark for the author of an article and is a possible turst-signal at the same time. Autors’ page: Written by <a rel="author" href="../autoren/serpino">Prof. Serpino</a> GooglePlus Account: Written by <a rel="author" href="https://profiles.google.com/12345678901112131415">Prof. Serpino</a>

Authors can produce not only content for their own website, but also on other pages. In order to inform the search engine that all content can be assigned to one author, you use rel=“me“. Example: Prof. Serpino often writes on http://prof.example.com. The link (prof.example.com) for Serpiones homepage (serpino.de) would look like that:

In return Serpino would show a link to get back on http://prof.example.com:

In doing so, the reciprocal rel=“me“ tells the search engines that the person from serpino.com and example.com/authors/serpino are the same.

Online there are many speculations because of John Müller’s statements on the Authorship Markup. Firstly, it seems like it’s important that Google stays interested to assign the authors to the content in the future. Because on the long term it’s important for the user to know whether a source is trustworthy or not. At the moment readers have to look after themselves and mostly focus on the big online-media for trustworthy content. Therefore, Müller’s reference on the possibility to link with schema.org an important indication for possible future-developement in the Authorship Markup. So at the moment there are already many possilibities to depose one’s identiy by using markup language. [4]

Looks like Google’s efforts to use their own Social Network for the authors’ identification failed for now. But on the long term it’s a better possibility for searche engines and other web services to mark the sourcetext to find the authors. Renouncing the Authorship Markup in the versions up to the 28th of August 2014 is an important step for the future consistent use of structured data which should help towards developing the author-trust in the end.