So far, there had been only two options for anyone who wanted to read an article online: Either visiting the website of the respective news portal or using one of the mobile apps. With the so-called Instant Articles, there is now a third option: Facebook.

Up to now, Facebook used to link their users to the original source of an article – this is now supposed to become unnecessary with the help of the so-called Instant Articles. Instead of linking articles to their own websites, selected publishers now directly implement certain articles with texts and photos on Facebook.

Among others, the social network promises publishers and their users a significantly improved usability from this cooperation. With regard to loading times, it often takes several seconds until websites of external publishers are fully visible on smartphones. If now Facebook itself hosts this content, waiting times could be significantly reduced.

An attractive offer for publishers?

Facebook tries to lure publishers into cooperating by means of promising arguments: On the one hand, newspapers are supposed to benefit from the tremendous scope of Facebook. With over 200 million english speaking users, the network indeed offers a potentially large readership for publishers. Whether this will compensate the full loss on the publishers website, is however questionable.

Along with the additional scope of the Facebook Community, publishers shall be won over with attractive marketing options. Publishers are thus able to sell the ads next to their articles on Facebook and keep the entire advertising revenue for themselves. If instead, the online ad is marketed via the Facebook promo network, the company still grants publishers with 70 percent of the income.

With paying out the entire advertising revenue in case of in-house marketing, Facebook plays a trump card. Along with the scope, these two aspects at least provide a short-term incentive for publishers to join the Instant Articles project.

But eventually, a certain dependence on Facebook is imminent.

A way of trying to oppose such dependence could show in all participating media reserving the rights for published contents on Facebook for themselves and also in remaining fully accountable in terms of press law – this results from a press release of Axel Springer. Likewise, Springer would like to develop a pricing model together with Facebook, so that fee-based articles and videos can be published as well. 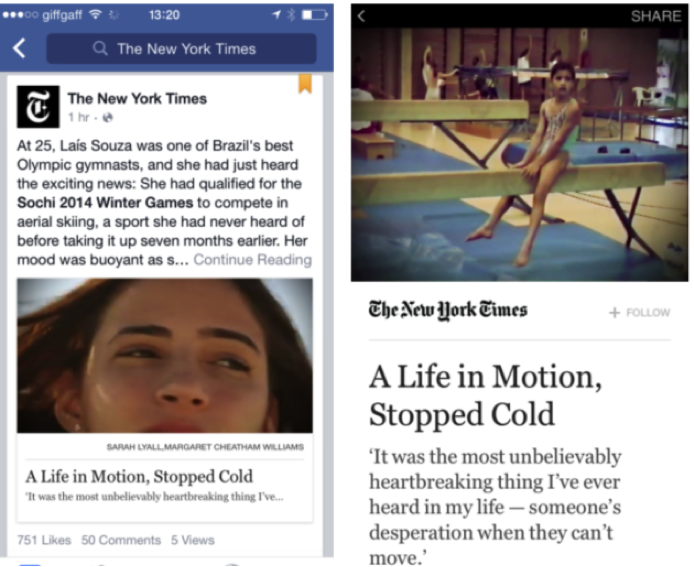 An exemplary Instant Article of the New York Times

On the scale of things, Instant Articles play a part in contributing to a range that is even more encompassing than it is already. Users are not even required to leave the social network for reading the newspaper any more. As a consequence, more and more people are spending even more time on Facebook.

For the social network itself, this only has positive effects. Like that, Facebook becomes more attractive for advertisers and can therefore charge more money. On top of this, Facebook disposes more data than any other media company and is therefore able to specifically target content and advertising to respective audiences.

Besides developing into an increasingly attractive advertising platform, it is also very likely that Facebook turns into an even bigger content host. The additional information extracted from the Instant Articles provide the basis for a strong, uncatchable advantage in knowledge.

From a user’s point of view, the underlying conditions of the Instant Articles read well for now. Publishers could also benefit from it as their articles are read more frequently due to an improved usability. Satisfaction on both sides, so to say – at least that’s what Facebook promises itself. Also, the social network anticipates that based on these aspects, more companies will take an interest in the project and decide to permanently offer Instant Articles.

However, one should not lose sight of the fact that publishers will become dependent on the social network, causing users to no longer visit their proprietary websites, where they try to earn money with online advertising. Various news portals depend on the traffic generated by links on Facebook already today. With the embedding of Instant Articles, this dependence could increase even more.

Being tied to the Facebook traffic, together with the already mentioned trend of Facebook as a content host and encompassing news portal, result in a potential which could be exploited by Facebook in the long run – the more media companies that participate in the Instant Articles project, the bigger the pressure to also be part of it.