PageRank describes a process that allows for the evaluation of web pages using an algorithm based on their incoming backlink links. The expression "PageRank" originates from Larry Page, who developed this algorithm together with Sergeyi Brin at Standford University and patented it in 1997. In principle, a page with many inbound links is weighted higher than a website to which only a few links refer. Today, Google's PageRank data is no longer publicly available. In SEO practice, the term Page Rank is often equated with link juice.

The principle of PageRank algorithm

The PageRank algorithm evaluates web pages according to the principle "the more links, the more important the website". Search engines like Google use algorithms as the basis for their rankings. However, today, many more factors influence the ranking of website, which is why PageRank loses its importance. The PageRank algorithm is based on the number of incoming links and the weighting of the linking page. Irrespective of the content of a page, it is better evaluated when important other pages link to it. The ranking of a site is therefore recursive to the assessment of the linking page. Thus, the complete link structure of the internet is involved. The link following basis follows the Random Surfer Model - a user, who is randomly surfs the WWW and therefore accesses many different pages.

A highly rated site can transmit its high PageRank to sites, on which it is referenced to via backlink. However, the value of those links are lowered as their are more other links on the site. The PageRank Sculpting technique tries to transfer the website’s PageRank to the subpages.

The PageRank of a site can be computed recursively:

d is a damping factor between 0 and 1 The link following is not continued infinitely by the Random Surfer Model. This is what the damping factor does in the formula. Each year the algorithm is updated. 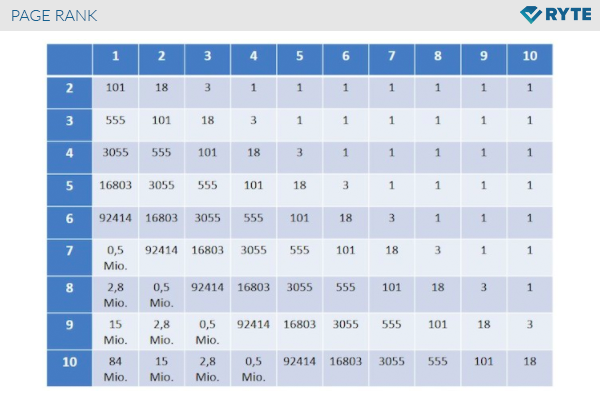 This table clarifies the question:"How many links with PR x are needed to reach PR x? For example, if a PageRank of 6 is to be reached, three backlinks with PR 7 are required. If you want to achieve a PR 6 with PR 6 links, you need 18 links. Basically, a specific PageRank can be reached with a single link from another website with a PageRank two points higher. For example, you can achieve a PR 2 with a PR 4-Link or a PR 6 with a PR 8-Link. The lower the PageRank of the linking pages, the more links are needed to reach a certain PageRank.

The calculation of the PageRank is a very complex process, which cannot be presented conclusively within a simple table. Depending on the outgoing links of a website, the table may need to be adjusted. As a rough guide, however, it has long been of great importance in the SEO scene. Google displayed the PageRank of a website with the help of a green bar.

A similar algorithm was firstly used in the middle of the last century with sociometry. At that time, the status of an individual in society was calculated. Washington State University has found that the Google PageRank algorithm is also suitable for determining the position of water molecules in the midst of other toxic chemicals. Moz has introduced MozRank, an internal factor for the evaluation of link popularity. Ryte's OPR is also an internal factor that reflects the link popularity of a page.

As the algorithm is based on links, the content, which is a more important factor for the user, is neglected. Advanced search engine algorithms take this shortcoming into account by adding further ranking criteria. In addition, it has been possible for a long time to buy links to get better rankings for your site. There was therefore a big interest within the SEO scene to get backlinks from websites with high PageRank. These links also gave the project a high PageRank. However, these values do not say anything about the actual added value, trust or content of a website. This presumably led to the fact that Google no longer publicly indicates the PageRank of a website. For the internal evaluation of websites, the PageRank still has a significance, even if the figures are no longer made publicly available by Google.

Past uses for search engine optimization

Prior to 2016, webmasters and SEOs could gain a first evaluation of the trustworthiness of a website using PageRanks. The weighting was done on a scale of 0 to 10. Websites with PageRank 0 were either new and had not yet been evaluated by PageRank, or were presumably downgraded because of web spam.

The higher the PageRank, the higher, theoretically, the trust in a website. For example, for a long time, the website of the White House in the USA was a site with highest trust and a PR of 10. Websites of cities, universities, or research institutions as well as charitable organizations generally have a high PageRank.

Since it can no longer be displayed in toolbars or other programs, the key figure for webmasters is no longer usable and is thus irrelevant. The publication of PageRank data over a long period meant that webmasters and SEOs were focusing solely on these key figures and overlooking the core of search engine optimization.

In modern days, PageRank still plays a part in search ranking algorithms, and helps Google use links on the web to evaluate qualitative measurements like a website's authority.

Various providers of SEOs and web analysis tools use their own metrics to determine the value of a page to improve internal linking strategies. One of those strategies being locating documents with high importance to the business but a low internal PageRank means there is optimization potential to pass along internal link equity to that malnourished page.

In regards to using PageRank for external incoming link purposes, it is more important to concentrate on achieving mentions on relevant and trustworthy sources rather than solely relying on a perceived quality, as well focusing attention on high-quality content and building technologically-perfect websites, instead of placing the greatest emphasis on metrics.