What exactly has been going on with Google? Definitely what many online marketing experts have been wondering. Profound changes, one after the other, have been taking place in AdWords despite the advertising business being one of Google’s main sources of revenue. The last highlight of this wave of innovation must be the introduction of enhanced text ads (ETA), which will be the main focus of this article. 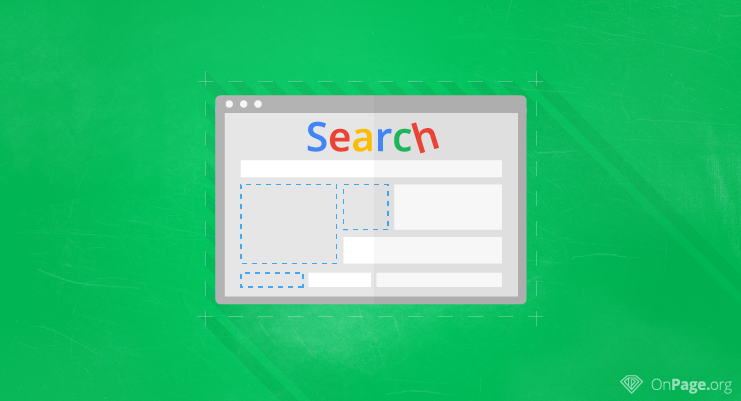 The principle of text ads on Google AdWords had never changed so far. Advertisers were always limited to specific character specifications when formulating their text ads. They could only use 25 characters for the headline and 35 for each of the two description lines. 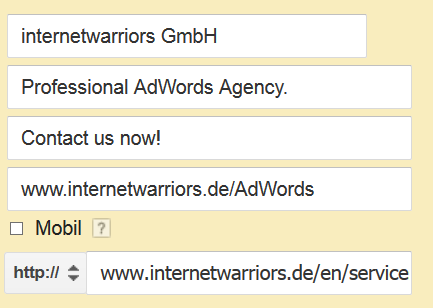 Different special practices for the formulation of advertisements have developed over time based on just the division of the message over two separate lines. In addition to promoting the USPs of the various brands, call-to-action measures were also quite effective in the second line.

Here, creativity was essential if you were to optimally implement this while observing the given specifications. The description lines had to be separated clearly using an appropriate terminating character (full stop, exclamation mark, question mark). Only so could the text ads be displayed (in the longer ad headline as well). And this can have a positive effect on the click rate. Finding a compromise between optimal presentation of the ad and appropriate ad content was often difficult.

The continuous introduction of new ad extensions made it possible to enrich the text ads with more information. This had effects on the size and display of the ads and helped improve the click rates.

The enhanced text ads can now be used in Germany since end July. The main differences from the previous ad format are:

1. There is only one description line with a maximum of 80 characters
2. Two headlines
3. Ad URL structure / path 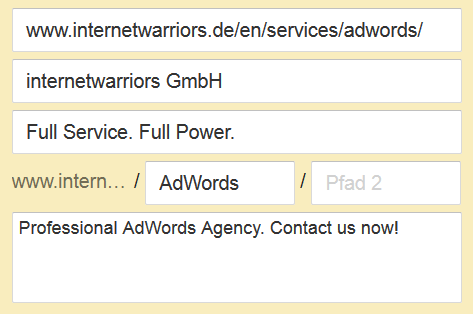 The merging of the two description lines now allows for longer, coherent texts. Advertisers are no longer forced to construct short sentences containing just 24 characters. They now have more freedom for much more customized formulations. This makes it possible to generate multi-variant texts.
In particular, this is particularly advantageous for companies that might be forced to provide complex descriptions due to the type of products they sell.

The additional characters allow for an even larger display of the new format text ads. 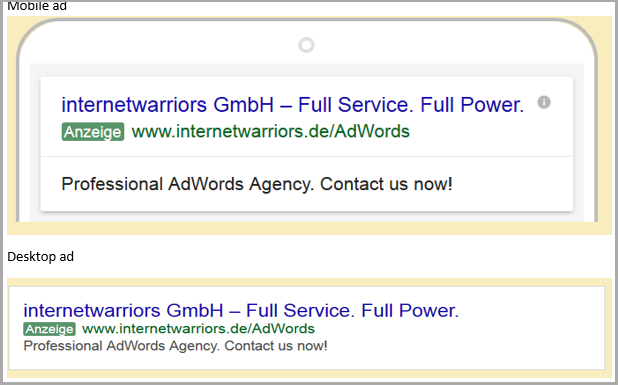 Figure 5: How the new enhanced text ads are displayed on mobile and desktop devices

Currently, both formats are still displayed at the same time. However, once the ETAs become the new standard, the maximum space allocated for the visible ads on the top positions will be much smaller. Advertisers will most probably have to fight through a more intensified CPC competition. However, it remains to be seen whether or not the ETAs will lead to a rise in click rates. Google hereby promises an increase of 20% or more.

Switching devices over the customer journey

Before a user becomes a customer, he/she will have switched the device an average of four times. This is according to studies by Google and United Internet Media. And this number is expected to rise in the future.

Sound analyses of customer journeys therefore become more difficult since the user data are often lost once the user switches devices. If a user has by any chance linked all the devices to his/her Google account, it becomes possible to get information about the conversions across all devices. With a sufficiently large sample size, it can be possible to derive the total number of such conversions. Such data are highly essential if you want to optimize your attribution model.

Since AdWords tracking is based on the last-click principle, effects that result when user change devices are not taken into account. Here, mobile traffic is characterized by rather poor ratings. As a result, many markets reduce their CPC offers for mobile devices, also because they cannot directly determine the actual value in AdWords. In addition, the lower competition makes the click costs for mobile devices much lower than for desktop devices.

From Google’s point of view, this presents a serious problem since the share of desktop traffic is on a percentage decline. Significant increase in traffic is only being recorded for mobile devices. However, for Google to be able to correspondingly monetize the ads, the amount of offers in the mobile channel must also rise. 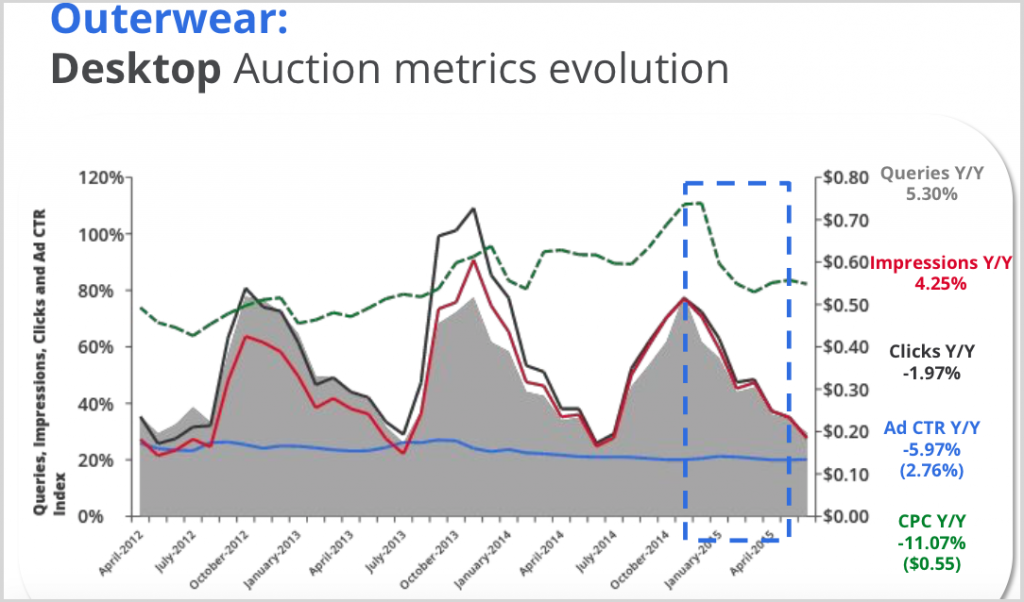 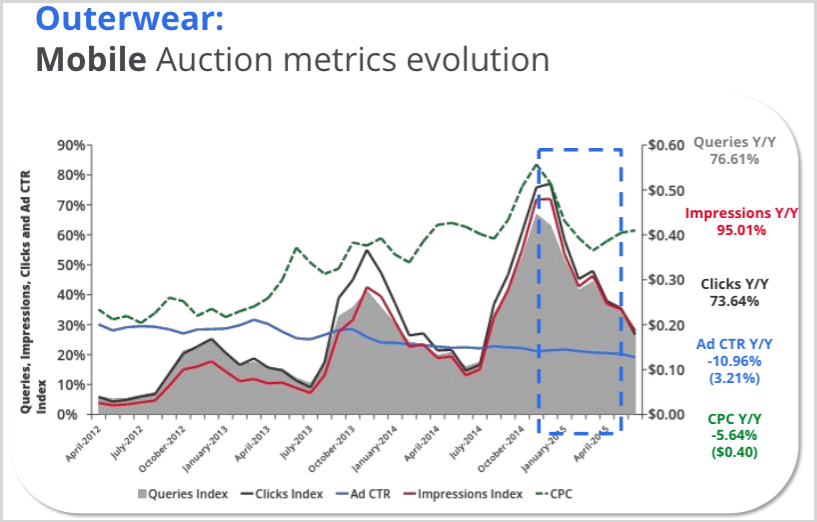 The latest developments in Google AdWords do not fit under these considerations. And it is not for nothing that Google has for quite some time being emphasizing the importance for mobile optimization. As already mentioned, this is certainly not without any self-interest.

With the modifications of the text ads, Google is pursuing an objective: Improving the performance of mobile advertisements so that they can keep up with the desktop. The appearance will be modified gradually for all devices. Gone are the times when text ads were optimized separately for mobile devices. Whether the ad enhancements will further be adapted to the mobile search results remains to be seen. The recently introduced price extensions at least point to this direction. The unveiled display of product-related price information is meant to raise the performance of mobile advertisements.

The number of strokes with which Google publishes important updates in AdWords has increased significantly in recent months. For marketers, this presents new opportunities for them to exploit. At the same time, these developments also mean additional effort. For example, all text ads on AdWords accounts must be created afresh for the ETAs. And although initial ETAs can be created easily using Excel or the ETA migration tool from OMP Tools, significant performance increase can only be achieved using advertisements that are perfectly adapted to the new format. Either way, there is no other alternative other than to react to the fundamental changes in the search behavior of users.

Here, the development is far from complete. The distinction between tablets and desktop devices will in the future be blurred further by the increased spread of tablet/laptop hybrids. And the technical development of smartphones is progressing steadily. It will certainly be interesting to see how Google is going to respond to these challenges. 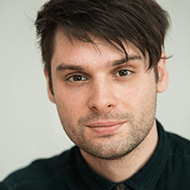